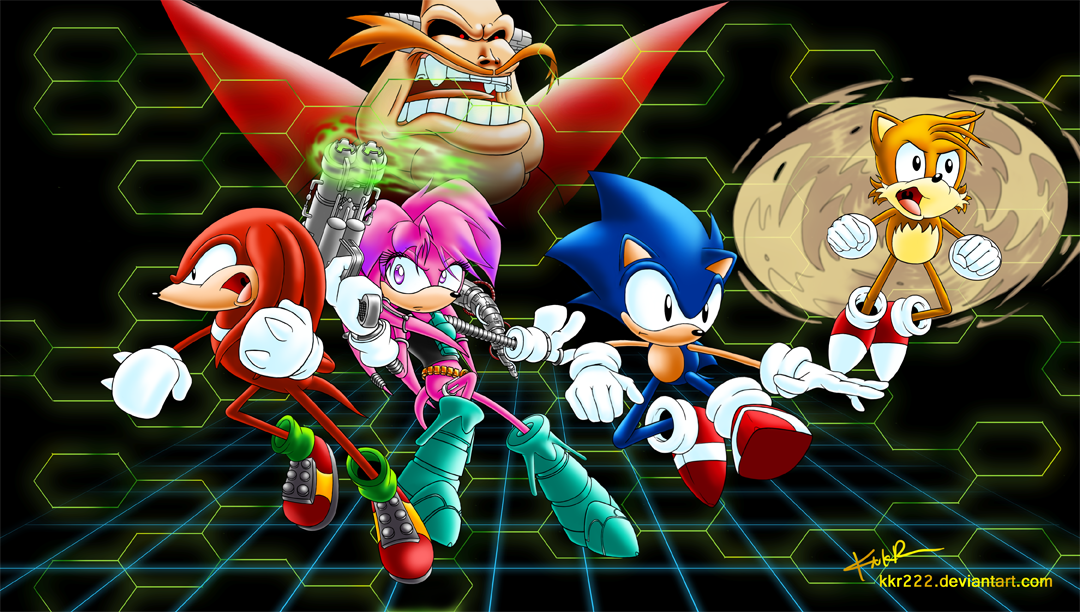 Sonic is probably one of my most favorite characters to draw, particularly the Archie comics version, and especially before the entire character design overhaul after the launch of Sonic Adventure for the SEGA Dreamcast.

Originally, I was just going to do a simple drawing of Sonic, then decided to add Knuckles. After Knuckles, I figured Tails might as well be in it, so that there would be all three characters from the first three Sonic games of the SEGA Genesis console. But wait! It wouldn’t be complete without the big (literally) bad himself, Robotnik! I stuck with Robotnik’s character design from the Saturday morning cartoon that aired on ABC (simply called Sonic SatAM by fans). I decided to stick with the character designs from Archie Comics (mainly issues #30-50), since it’s what I’m most familiar with. Thinking back about those comics, I remembered another character from the comics who I found intriguing, Julie-Su. I hadn’t read the comics since somewhere around issue #60, but I’ve learned that she’s been playing a very prominent role. This is interesting, because if I remember right, she is the only main character to have not starred or appeared in any game or cartoon (pre-Endgame saga); basically she was born in the comics. If I’m wrong, someone please correct me on that.
(At some point I’ll have to pick up where I left off. I hear the comics are up into the 200s now; lots of catching up to do.)

To be honest, I do prefer the American canon version of the Sonic the Hedgehog franchise, as well as the character designs. Mainly because it was the first (I think) attempt at creating a story driven world for Sonic. For those that are unaware, Sonic SatAM is related to the comics by Archie. Infact the first 50 issues are loosely based on the show.

Anyway, it was fun to work on this. Julie-Su took up the bulk of the time, since she had the most assets and there were very few decent references that I could find of her around the net. I mostly had to work with just Knuckles Issue #5, which also had the best looking reference for her gun. The rest were easy to draw, since I had drawn them frequently enough when I was younger and still reading the comics that it’s all muscle memory now. I tried to keep the colors close to the comic covers.

Character designs and style based on those by Patrick Spazainte (love his stuff), main cover artist since at least issue #31. The way I’ve always drawn Sonic is based off of his work and is basically how I learned to draw him in the first place, as well as giving me a boost in art and drawing in general.